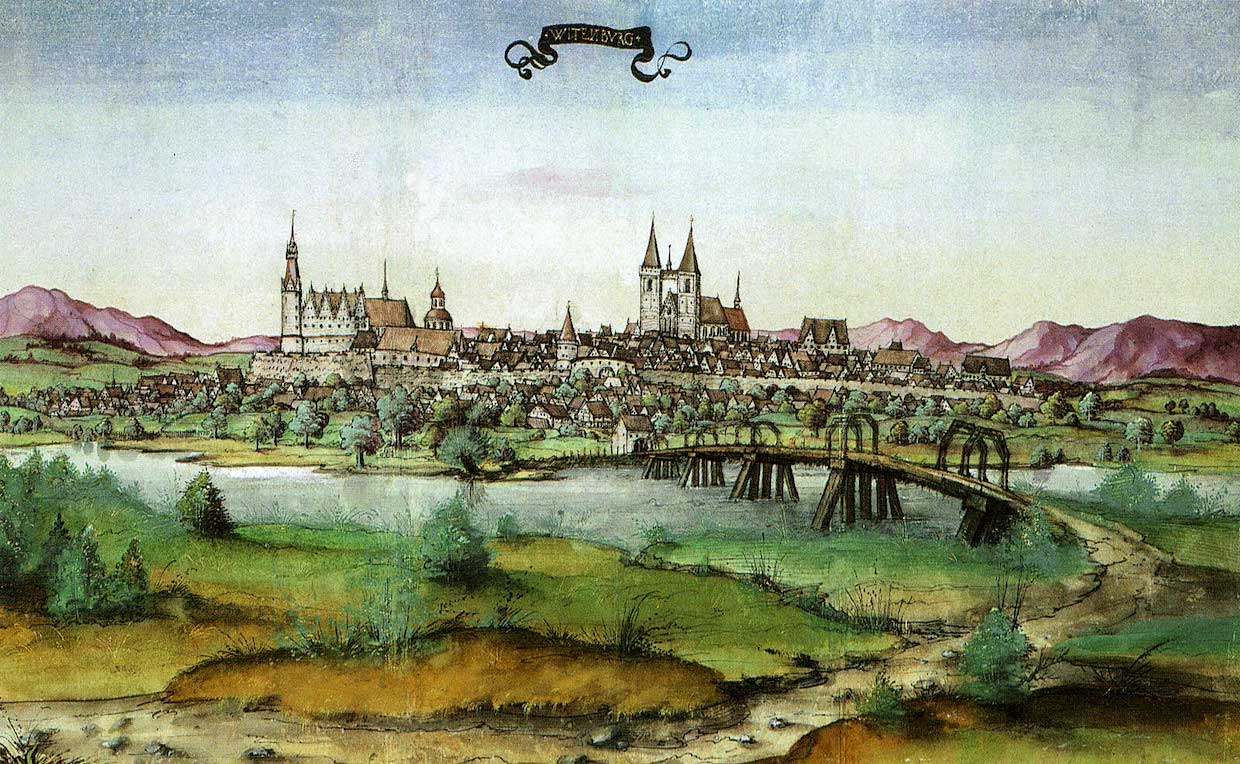 This is how Wittenberg looked around 1540. Our view looks north, across the Elbe River, to the town, which stretches from west to east along the river. A wooden bridge crosses the river and leads toward the southern city gate. This picture shows the three most important areas of the city: in the west (i.e. on the left) the elector’s castle, in the middle the market square and the churchyard with the town hall and the parish church, and in the east (i.e. on the right) the university quarter.

A plan from around 1600 shows the layout of the city.  The main street runs from west to east, connecting the two gates at either end.  At the market square, an alley turns off to the south gate where a bridge crosses the Elbe River. Some streets stretch out to the north and make the city layout look like a semicircle or a triangle. The city is enclosed by ramparts, for Wittenberg is a fortified city. 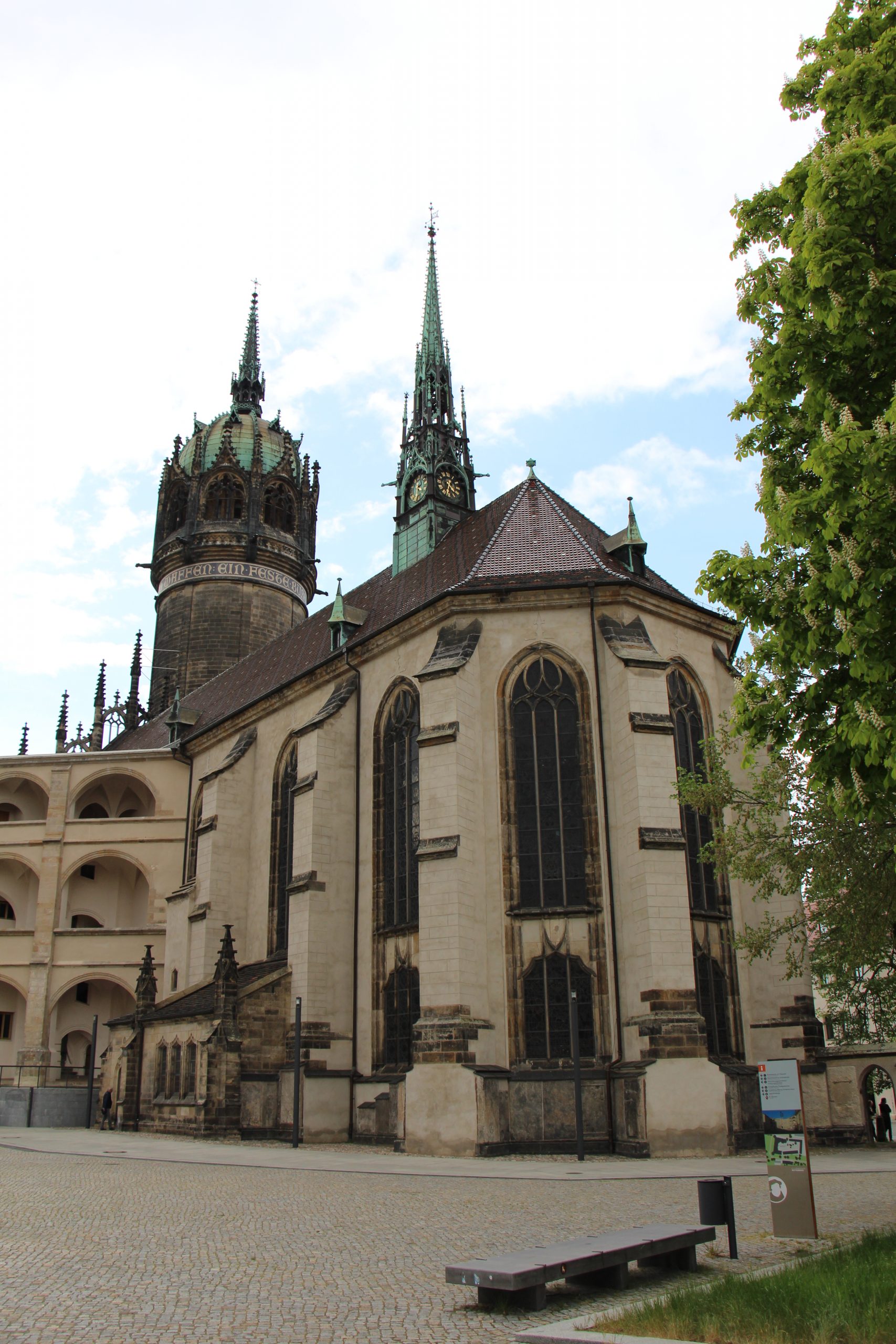 At the west end of the city, the Saxon elector resides in a magnificent Renaissance castle with two high towers. The tall, narrow and elongated All Saints’ Church forms the castle’s north wing. Until the mid-1520s this Castle Church was a place of intense late medieval devotional practice. Elector Frederick the Wise and his brother, Elector John the Steadfast, are buried here. It also served as a place of worship for the court and as a meeting place for the university. Messages for the university were placed on its entrance door, probably including Martin Luther’s 95 Theses against Indulgences on October 31, 1517. Because of later war damage, the original splendor of the castle and its church can only be guessed at today. 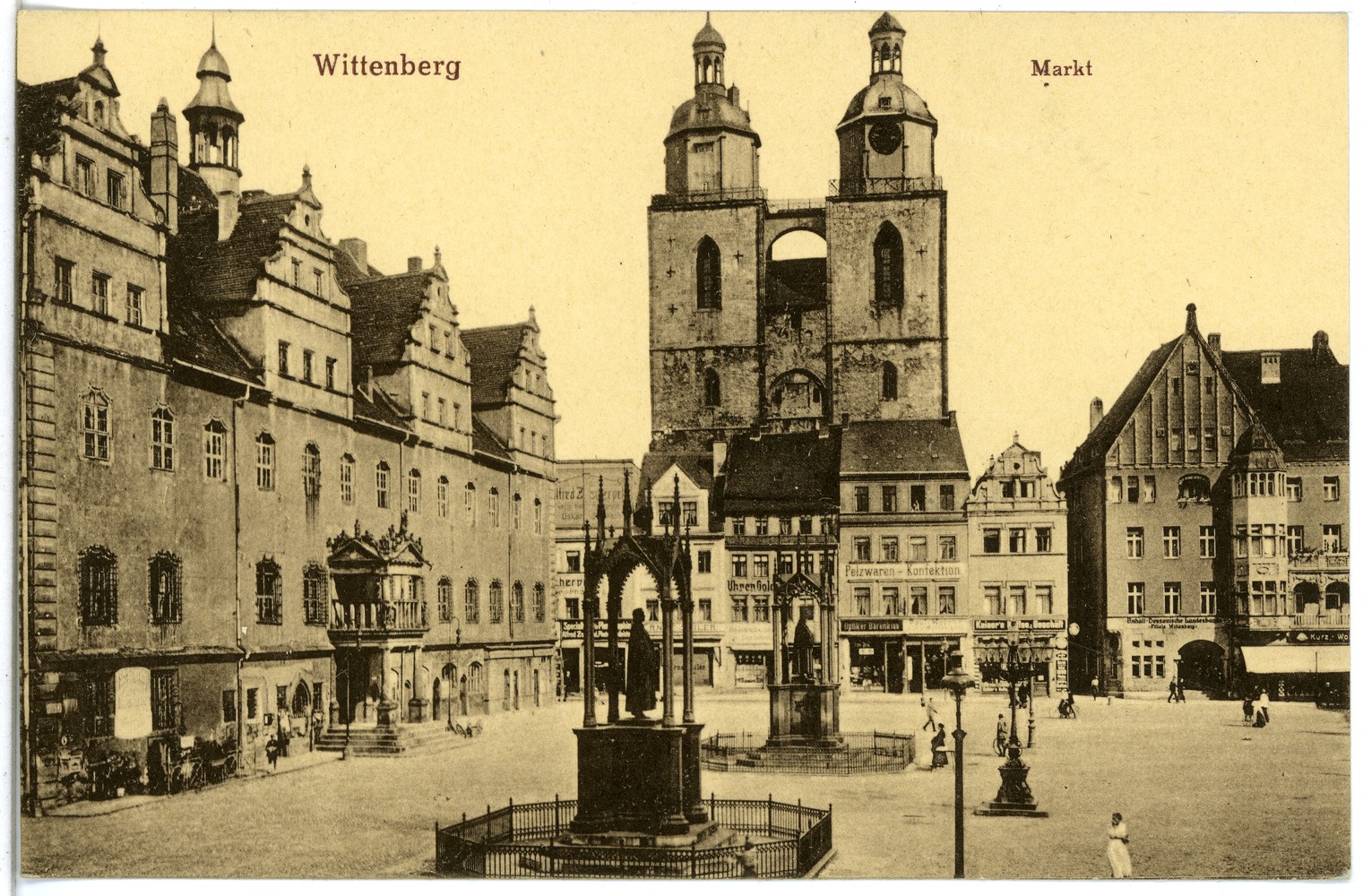 The market square and the churchyard were the center of activity for Wittenberg’s citizens during the Reformation. The town hall and the parish church was located here. The town hall was rebuilt in the 1520s, but it was not until the 1570s that it received its present exterior design. Today’s appearance of the parish church is largely the same as in the Sixteenth Century, except that the additional storey of the sacristy did not exist in 1540 and the interior decoration has changed. The pulpit from which Martin Luther preached to the Wittenberg congregation is now found in Luther House. 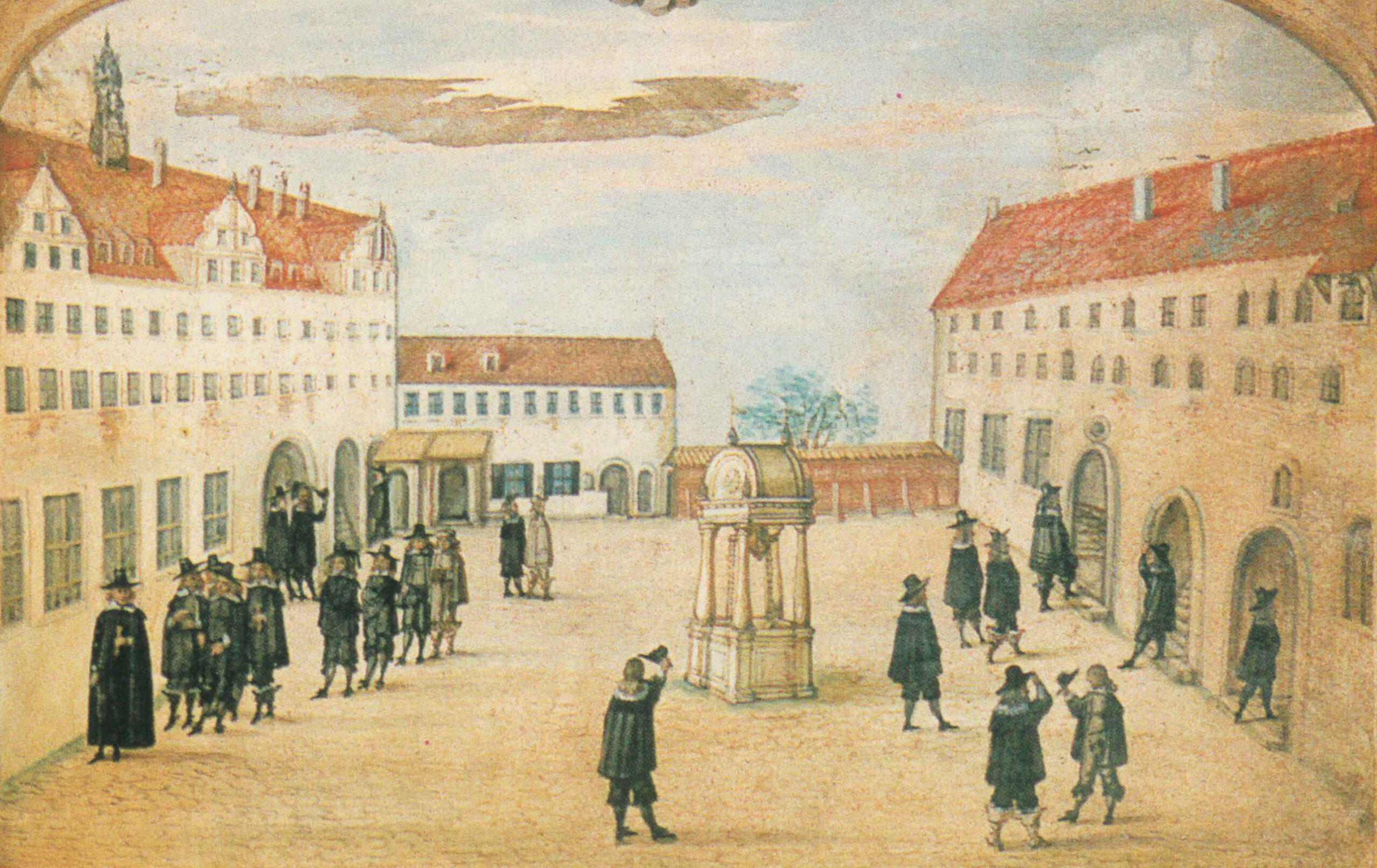 The university district is located at the eastern end of the city.  In 1502, Frederick the Wise, the Elector of Saxony, founded Wittenberg’s university.  Since the name of the town in German means “White Mountain,” Frederick called his new university by its Greek equivalent, Leucorea. At the heart of this district is the university’s main building Collegium Fridericianum (Frederick’s College). Other university buildings can be found in the north, west and east of the city: the building of the Faculty of Law, the University Library in the Castle, and the University Hospital. In the Sixteenth Century, Wittenberg was the most attractive and influential university in Europe. Philip Melanchthon, Martin Luther and many other academic teachers attracted numerous students to the city and shaped the church as well as the world with their teaching.

At the end of the 1530s the elector and the city constructed a new house for Philipp Melanchthon, Wittenberg’s most popular professor.  Here the humanist and reformer lived and worked.  Today, still standing next to the university’s main building, and presenting a beautiful gable to the street, his house remains almost unchanged. 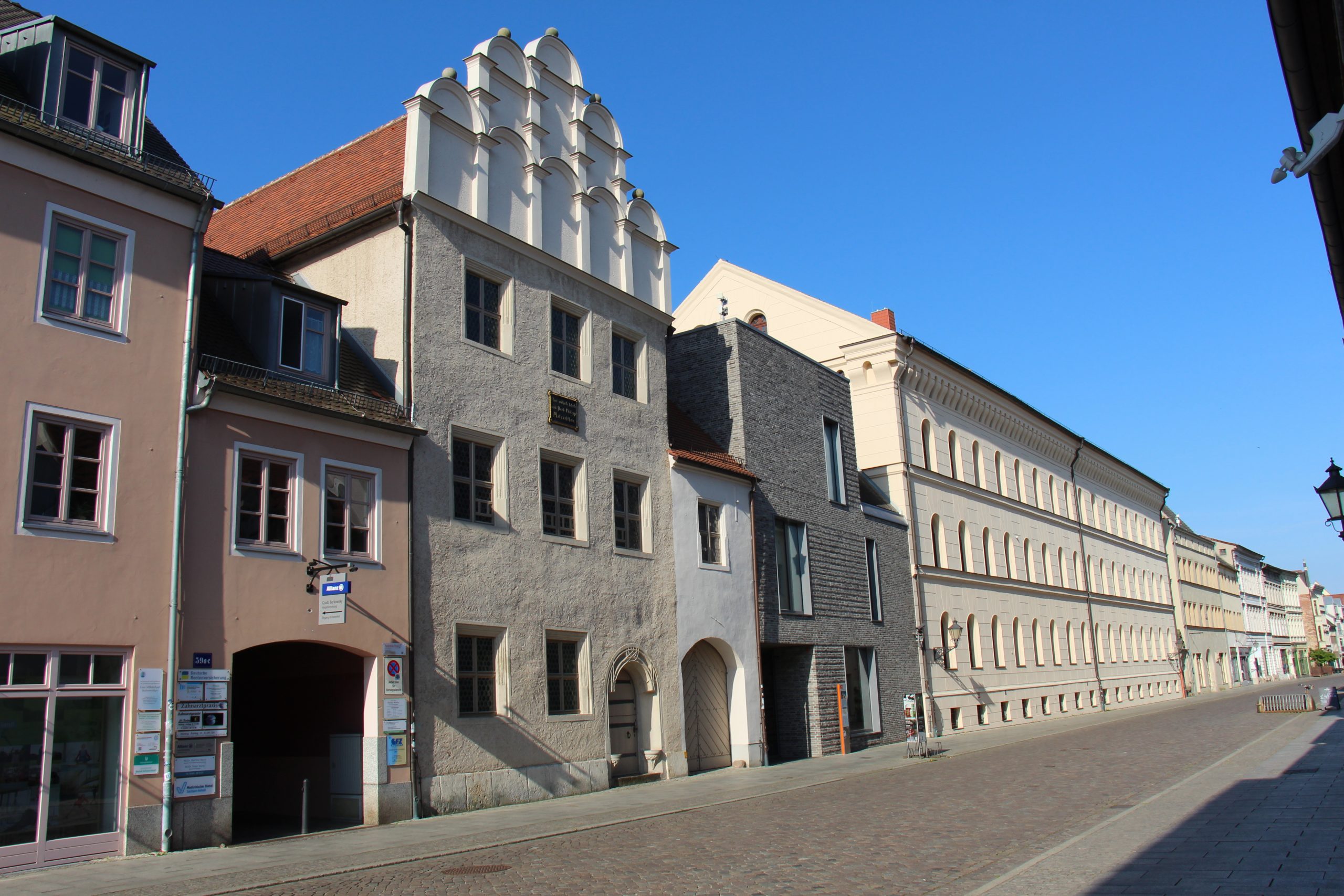 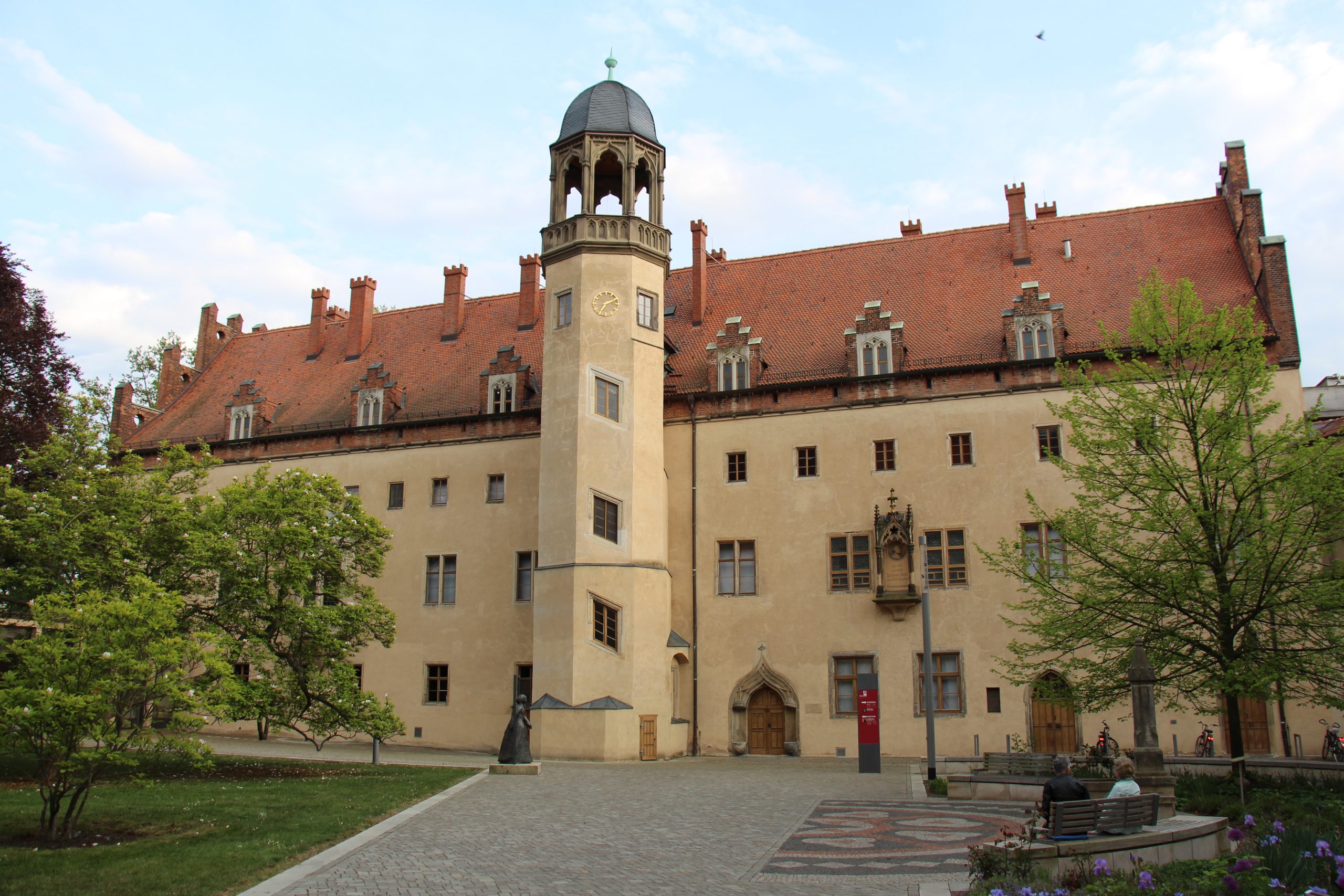 When Elector Frederick the Wise founded the University of Wittenberg in 1502, he invited the Augustinian Hermits to build a friary and bring professors and students to Wittenberg. Of the monastery building, only the south wing (the residential building) was built. Here, between 1512 and 1518, Martin Luther learned to understand the Bible anew and developed his Reformation theology. It was here that he wrote the tracts and letters that sparked the Reformation movement and changed the church. From 1525, the Luther family took over the building as their residence. The entrance portal with the pointed arch, where Martin Luther would enter and exit the home, bears the date 1540.

Further information on Wittenberg in the Sixteenth Century.

Our activities depend on your support! Please help us open up the Reformation for today.